In June 2017, Superfast South Yorkshire launched a Public Consultation as part of its preparations for Phase 2 of the Superfast South Yorkshire programme. This public consultation sought views from interested telecoms providers and other stakeholders on the proposed Intervention Area ('White areas') for Phase 2. This is where we believe there are no commercial telecoms plans for superfast broadband and where public funding is needed to bring forward plans.

The maps provided in the consultation were informed by the outcome of an Open Market Review which was launched in March 2017. Telecoms providers were invited to confirm their existing and planned commercial coverage in South Yorkshire, looking ahead three years - such coverage being defined as Basic Broadband or Next Generation Access (NGA) depending on the quality of technical standards met. NGA involves fibre optic based networks which are wired or fixed wireless access and are capable of higher throughput than traditional copper networks.

Superfast South Yorkshire has considered the responses to the consultation and prepared revised Basic Broadband and NGA maps. The 'White' areas on the NGA map comprise the eligible Intervention Area for Phase 2. The maps can be viewed in the State Aid Public Consultation Closure Report below.

Superfast South Yorkshire seeks to secure State Aid clearance for the procurement from the National Competence Centre on 15th December 2017. Further clearance will be required to enable a contract to be awarded as Phase 2 must comply with the recent decision by the European Commission on a new National Broadband Scheme for the UK. This forms part of the regulatory framework governing how public funding can be invested in broadband networks.

The eligible intervention area for Phase 2 of the project can be viewed here. The 'White' areas on the map are areas where public funding can be invested in NGA broadband networks. The Blue areas are under review as commercial plans in the area were uncertain at the time of the State Aid Public Consultation. Existing or planned commercial coverage, or plans already committed/delivered under Phase 1 of the Superfast South Yorkshire project, are shown as Grey or Black on the map. 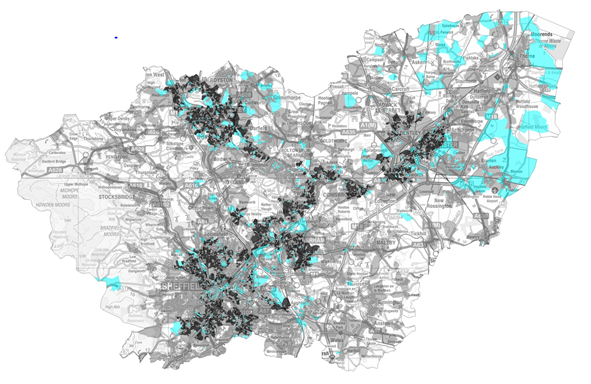